On July 8, 2011, there were some major storms in the Philadelphia area. We were leaving for the Phillies game at 3:30 and there were flash floods in the area.  We didn’t think the game was going to happen, but we left anyway!  We arrived at the park and it was pouring. Watching us run from the car to the park was quite the sight in the rain. All the time wondering how the game was going to happen. Here is the shot of the field at 7:05, which was to be the start of the game. If you look closely at the first picture you will see the time! 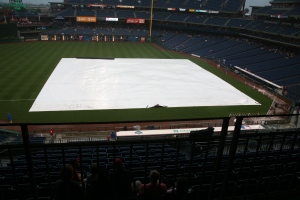 At one point my sister sent me message that is was sunny where she was (western suburbs of the Philly area), so we looked at the weather in Doylestown. HAHAHA…..it was:

So, we did what we do best….laugh and enjoy each others company! The game started after a 1:52 delay….Roy Halladay pitched and the Phillies won. The game was played, but I am sorry to say that we didn’t see the end of the game….it was 11:30 pm and only the 8th inning. Here are some moments of the game that I captured.

We laughed and had a great time last night!

1 photo/day 870. Thank you @sweetevadiva for hosting us today! I don’t know who had more fun, us or Zuzu. Lol.
We are having a rainy weekend in #doylestown, but that didn’t damper a fun day with friends! So much great #vegan food! Thank you @sweetevadiva for hosting! #friends #sundayfunday #sundaybrunch #joy
1 photo/day 869. I love supporting our #localfarmers. Today at @doylestownfarmersmarket I got muffins from @nordbread and tomatoes from @lovegrowscsa. Even though summer is over, nothing beats summer tomatoes. Yummy dinner!!
1 photo/day 868. It’s #plaidfriday and guess what I forgot to pack…..plaid! LOL.
1 photo/day 867. Fun day seeing a couple of my favorites! Thank you @courtneytrembler for hosting us for brunch.
1 photo/day 866. When you are near the @llbean #flagshipstore in #freeport, you have to stop by. It was great and we found a jacket for my mom.
Press Enter To Begin Your Search
×
Loading Comments...
%d bloggers like this: