When planning a trip, I start reading blogs and travel books about the area to see where want to visit and what to do. When my sister and I started planning our first trip to Paris, we kept reading about the love locks bridge. So, we added it to the list of things we wanted to do. Yes, I was one of the tourists who put a lock on the bridge. Since that time, I have changed my mind about the love locks in Paris.

Tourists have been placing locks on the Pont des Arts bridge to show their love since 2008. Around 2012 it started causing structural issues with the bridge. According to a CNN article: The phenomenon spread to other bridges, creating two major concerns for the city: “degradation of property heritage and a risk to the safety of visitors, Parisians and tourists,” the Paris City Council said on its website.

After part of the Pont des Arts bridge started collapsing from the weight of the locks, which was equivalent to 20 elephants, Paris removed the locks. On June 1, 2015. Plexi glass was placed on the bridge, so locks couldn’t we placed on the bridge. After my visit in December of 2015, I realized how this is causing a problem with the historical sites and harming them. In addition, all the keys that have been thrown into the Seine, which I am sure is causing issues at the bottom of the river. I really do like the way the bridge looks without all the locks. Since the removal of the locks Paris has been doing art exhibits on the bridge.

This area of a different bridge was block off for fear of issues like on the Pont des Arts.

The practice of attaching locks to the bridges has spread to 11 bridges and even the Eiffel Tower in Paris. Tourists really are attaching locks on anything they can find. The No Love Locks organization begin in 2012 to spread the word about the destruction the locks cause. These photos were from my trip in December of 2015 and the different bridges where tourists still place locks. 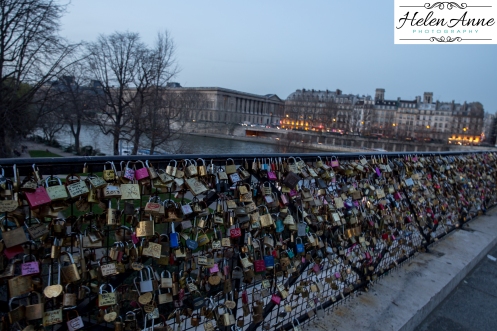 After learning about the harm done to these historical sites in Paris, I won’t be placing locks in Paris or anywhere in the future.

1 photo:day 614. #plaidfriday. So much ❤️ in this photo! Mental health for me is Friday nights at @domanistar.
1 photo/day 613. This is the view of the @mercerandfonthill museum from the #labrynth in #doylestown. There is a blue hue from the Christmas that is lit blue.
1 photo/day 612. How cute is this free pantry in front of @stpaulsdoylestown in #doylestown? When I was on my walk this morning, I thought it was a free library. I loved seeing it’s a free pantry. There were small pantry items in there.
1 photo/day 611. Tonight’s #wolfmoon in #doylestown is beautiful! It’s a crystal clear night to see the #fullmoon.
1 photo/day 610. Last night when I went to bed there was a beautiful layer of #snow covering #doylestown! During the night the temperatures rose and the snow melted!
1 photo/day 610. Last week I went to @quinoadoylestown for brunch. Today I went back with my friend @sweetevadiva. I have never had their Mexican corn. Today I did and now I see what @tessasenf meant! So good.
Press Enter To Begin Your Search
×
Loading Comments...
%d bloggers like this: